Our January 9th meeting was at the regular time of 9:30 am at the Town of Weaverville Community Room.

Our  speaker was Clara A. Curtis, Director for Design, Education and Exhibit Assets at the North Carolina Arboretum.  She discussed the history of the NC Arboretum and its mission programs.  NC Arboretum is located:

“…amid a 434-acre public garden located within the Bent Creek Experimental Forest. Surrounded by lush folds of the botanically diverse Southern Appalachian Mountains, The North Carolina Arboretum is adjacent to the scenic Blue Ridge Parkway, at Milepost 393, and is nestled in one of the most beautiful natural settings in America.

Established in 1986 by the General Assembly as an affiliate of the University of North Carolina, the Arboretum was founded nearly a century after Frederick Law Olmsted, the ‘Father of American Landscape Architecture,’ first envisioned such an institution near Asheville as part of his legacy to the Biltmore Estate.”

More than just a stunning display of nature, this jewel of our state has a mission with five components:

We learned that because of the massive cuts in state funding of our publicly supported university system, our arboretum has the extra job of increased fund-raising. This puts more responsibility on private sources and community support for fulfilling the mission. We are encouraged to take classes, participate in events, visit exhibits, and become active members of the NC Arboretum.

We learned that NC Arboretum is being gifted this year with the only statue in this country of Frederick Law Olmstead. We are encouraged to look for this and other new developments.

Clara A. Curtis, Director for Design, Education and Exhibit Assets at the North Carolina Arboretum and garden club members

Many thanks to DaVita Dialysis of Weaverville for a generous donation! These funds will be used to support our educational programs. 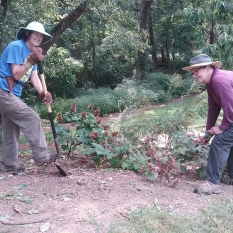 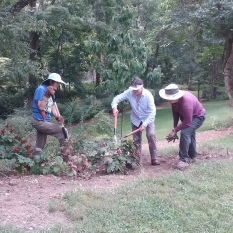 Envisioning a beautiful community for Everyone